What You Don’t See Can Hurt You:  Why States Need Strong Specifications for Disaster-Resilient Evacuation Routes

October is national Fire Prevention Month to raise awareness about fire safety in communities across the country. As we think about ways to ensure homes and families are protected from fire, we think about many precautions inside the home. Are smoke alarms functioning and on every level of the house, including the basement? Does the family have a fire evacuation plan? Outside the house, is there a 5-foot barrier around the perimeter without trees or other flammable materials that could ignite the home?

In the case of an extreme event such as a wildfire encroaching upon a residential area, evacuation routes must be considered. Are your roads fire-resilient? Will you be able to get in your car and drive to safety?

What would you do if you couldn’t drive on the roads? What if the exit route collapses due to burning culverts under the roadway? Unfortunately, many community members remain unaware of the things they don’t see – flammable underground infrastructure – that can hurt them.

Evacuation Routes Must Be Fire-Resilient

Emergency evacuation routes should be fire-resilient to allow citizens a safe exit route and firefighters a way of getting in. Yet all too often, especially in areas prone to wildfires, roadways aren’t safe from fire. For example, consider the 2018 Camp Fire that raged across Paradise, California, destroying the town and collapsing roads. 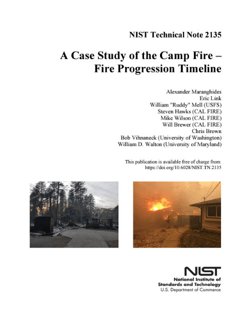 Regarding the collapsed roadways in Paradise, the National Institute of Science and Technology (NIST) recently published a report on the Camp Fire progression timeline. The report concludes the cause of numerous collapsed roads to be flammable culverts comprised of materials such as high-density polyethylene (HDPE) and metal. Hundreds of plastic culverts burned out. “If it was plastic … it burned,” says the report.

“Following the immediate impact of the Camp Fire, one of the most hazardous secondary damages from the fire was melted culvert pipes. During the active Emergency Operations Center, Public Works staff deployed streets crew members and mutual aid resources to begin scouring the Town for potential melted pipes. As wind-driven fire with low-flying embers, miniature fires were ignited inside open-ended culverts and, depending on the construction material type (HDPE, metal, etc.), completely burned out several pipes, collapsing and undermining the roadway.”

With the threat of wildfires, the most fire-resistant specification is concrete pipe and box culvert. Concrete is inherently fire-resistant and provides the most secure exit route to keep communities safe.

To ensure evacuation routes remain safe, we need better guidance from our policymakers and firm language in specifications . In areas prone to wildfire, legislation should state that flammable materials shouldn’t be used under the roadway. To be clear, every underground pipe doesn’t have to be non-flammable. However, those underneath emergency evacuation routes in wildfire-prone areas should always be made of fire-resilient concrete.

For more information on the fire resilience of concrete pipe, see our Key Issue Statement on fires. Then contact your local representatives and urge them to adopt strong language for the safety of evacuation routes.

Protecting the Right to Choose